Why won't this symbol loop

I converted a simple square shape to a symbol, opened the symbol to edit it’s timeline and placed a trigger at the end of the symbol’s timeline to make it loop, but it only plays one time, then stops, what am I doing wrong. ( I have attached the project for inspection )

Not sure why it won’t loop. I tried to fiddle with your example.
Several have said it is better to use timelines instead of going inside a symbol. Anyway, I did it using a timeline. I still had the same problem you did, but after fiddling around i got it to work. Not sure if my way is the best practice (still a newbie). boxFade using timeline.saolapack (1.9 KB)

Thanks for the reply. I just discovered something by accident.

Must be a glitch. I did what you said, and it worked for me too (your file).

Oh good, I am thinking like you just said, could be glitch I have found or, maybe its just required to do it that way for reasons I don’t understand yet. Hopefully ToanLe and one of the others from Atomi can make more sense of it, but at least I can make a symbol loop now, I was getting worried. Gotta have my looping symbols!

The triggers are wrong in both of your examples. You are not starting the timeline, you need to use the play Timeline From trigger set at 0.

I tried it that way too before I posted but it still will not work. The only way it works is if I:

Create a shape on the canvas, right click it and convert to Symbol. Edit the symbol and put the trigger on the Symbol’s timeline ( can be play from or start either one ) but it will not work until I delete it off the canvas and drag a copy back on from resources panel, then it works / loops.

Apologies start from works fine. I’ve been doing something different as I didn’t realise that there was an autoplay for the symbol (I used the play event). I think it does work though. Try this: 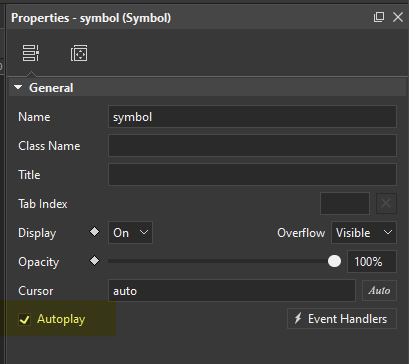 I’ve always done steps 1 -3 but use the play symbol event instead of the autoplay option.

If your symbol has playback, it only plays once. So don’t use this:

To make an infinite loop, you can use the symbol Autoplay property, or add a trigger at the start of the main document timeline to start the symbol.

I deleted it off the canvas and then dragged it back on to the canvas from the resources panel, then clicked “Autoplay” again, and boom, it loops when you do it that way? I don’t understand why?

Because when you convert the element to symbol, Create Playback option is selected by default. So don’t select this option as mackavi pointed out.

You should at a trigger at the start of the main timeline to start the boxFade_TL timeline. Don’t use Play event because this event will be trigger each time the main timeline changes its state from pausing to playing.

Because when you convert the element to symbol, Create Playback option is selected by default. So don’t select this option as mackavi pointed out.

Thanks Toan and mackavi I see now how to make it loop, I had tried what mackavi said but I was somehow confusing “Don’t create playback” with “AutoPlay”, and kept missing the part about “Don’t Create Playback”, when I do that, it loops!