Instead of moving elements across the screen when using left-right arrow keys, it moves the red bar indicator in the timeline even though my “focus is on the element”, I have to press Shift key + left or right arrow to move element on screen. ( I tried turning the numbers key on and off, did not help) I am certain the left-right arrows used to move elements on the screen without also having to press the shift key.

It seems that it broke in the latest update. Hopefully, it will be fixed soon.

Thanks mackavi,
That’s a relief to know after a couple hours last night / morning changing windows settings, trying a different keyboard, rebooting, and then just before I posted my question, I remembered we just did that update.

To be honest, the latest update - Saola Animate 3.1 added some commands with default shortcuts that match the keys used to move elements on the Canvas.

That’s the reason why you can no longer use the left/right arrow keys on the Canvas.
But you can customize the keys as you want by doing as follows: 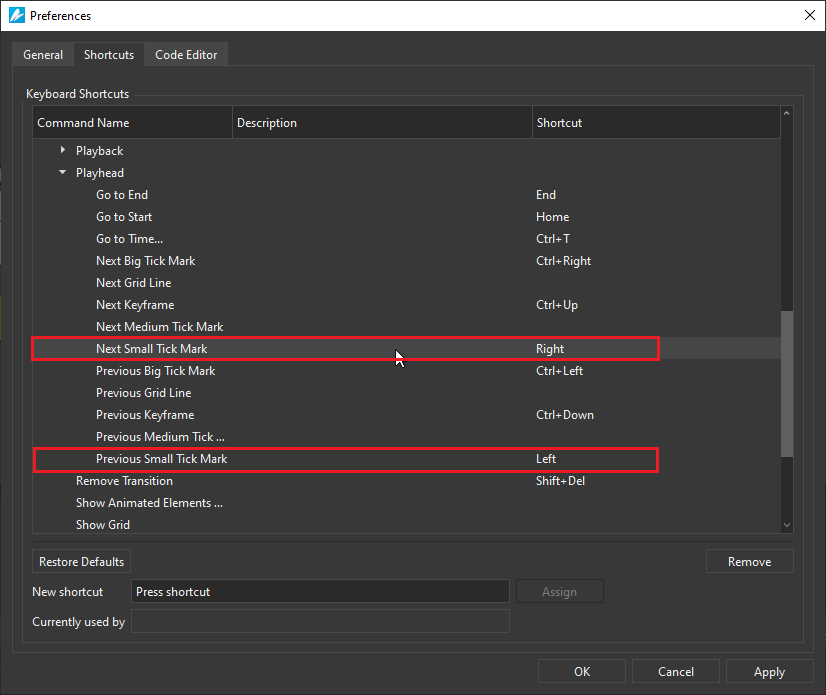 Then, you can use the left/right arrow to move elements on the Canvas as before.

Hope that it clarifies.

Thanks for explanation.
Interestingly, on my computer when I went to the Playhead shortcuts the “L” and “R” were not shown as assigned, instead each box was blank like nothing had been assigned. So I clicked in each one of the shortcut windows and assigned L to Previous and then removed it, and then assigned R to Next and then removed it, and now the arrows are moving elements again. (I do like that feature of being able to move Previous and Next small click at a time…so I assigned Shift+Left and Shift+Right)

Thanks for your help, as always great support and yes, Happy New Year!
Locky