In a video clip that has been trimmed, if a start/end animation is added and then later removed, and there is empty space in the line around the clip, then when the animation is removed, sometimes the clip start position is moved as far left as it can go (or the end position is extended to the right).

Thanks for your reply.

I understand. This description of the behavior makes sense. However, I still think there is a problem, it’s just different than what I originally identified:

(TL;DR) I think the Remove Animation context menu action (and also the delete key, and the behavior when an animation is dragged off the clip) should reset the effect to Appear or Disappear, rather than to None.

I’ve put together a short video of behaviors that I find unexpected: ActivePresenter, issue removing animations - YouTube. None of those seem intuitive to me. (Also note there’s a couple other definite bugs in that video, such as the clip being moved to its own line.)

Given the behavior you describe, there is currently no real shortcut to restoring a clip to its “un-animated” state; the only option is to go to the animations menu and select Appear or Disappear. I think this is strange because I believe that resetting the animation to None is virtually never what somebody would want to do (I may be wrong).

Also, when a new clip is inserted from a file (it doesn’t actually matter if you trim it, btw), AP initially gives it the Appear and Disappear effects. This is another reason to have the “remove” actions use Appear/Disappear instead of None. In fact, “None” never really appears in the natural flow of things and I could almost argue that “None” could be removed from the effects dropdown entirely.

I’ve tried my best to illustrate the issue in this chart. If it’s confusing, just ignore it I guess, lol: 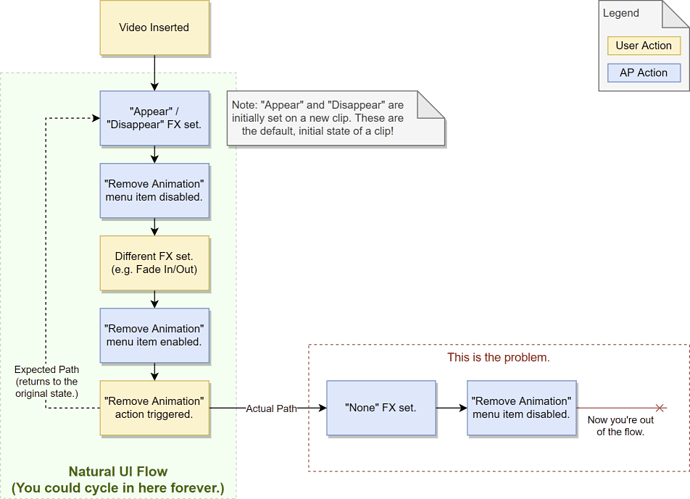 As you can see, the current behavior never really returns you to a previous state, thus breaking you out of a natural (imo) UI flow; whereas if “remove animation” restored the clip to the initial state instead of “None”, you could continue working without disruption.

Hope this was clear!!

Thanks very much for the detailed explanation.
We will consider improving this part in the future update.