Problem: I created a button as described in today’s YouTube video and added a second scene. While the Action Types “Go To URL” and “Change Text” worked fine, the Action Type “Jump To Scene” didn’t work for me. I tried all the various options in Target Object, but without success. Neither the preview nor the exported version did work, the second scene never appeared. What did I miss?

Notes: Congratulations to the launch of SAOLA Animate!!!

We’ve look into your problem and tested the Jump To Scene action, but we could not reproduce the problem you encountered. Could you share with us your project file so that we can check it out? Please send us the entire project folder or the *.saolapack file (File > Save As > Package) at support@atomisystems.com.

I have the same problem unfortunately. The bug exists.

Scenes are set auto-advance by default, so if the main timeline doesn’t have any animation, it’ll continue to the next scene immediately. Please clear the Auto-Advance checkbox in the scene Properties pane and try again.
You can also select multiple or all scenes in Scenes pane and change this property at once.

If it’s not the case, please share your project so that we can check.

Thanks for getting in touch with me via e-mail. It turns out it works as you explained! I was just hitting the wrong preview button. It’s a great program.

I have had the same problem but it is now going forward after switching off auto-advance. However the next scene seems to take a long time to load and when it does the timeline does not start as planned. Any feedback on these two issues are appreciated.

Maybe it’s a project-specific issue so please send your project package (File > Save As > Package) to our support at support@atomisystems.com for checking.

Updated (for other users):
The main timeline in your project contains a trigger at 0 which starts the timeline again, so it causes infinite loop.

Hello Toan Le!
I have the same error:
Testing version 7.1 with Win 8.1. My package is attached. thanks! 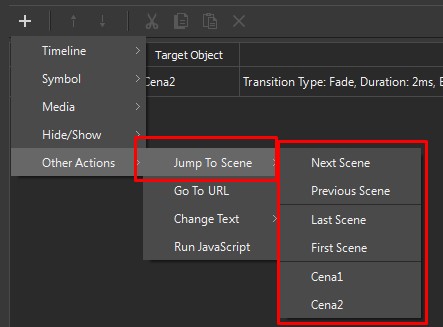 You have a Jump To Scene action in Scene Activate event of Scene 1 so it’ll jump to Scene 2 immediately.

Hello Toan! Thanks for the feedback! Unfortunately, it is not working. Any other function works, such as: GoToUrl, Change Text, etc. less skipping scenes …
Scene Activate was already configured, but it didn’t work either …

I really need to test this function,

Could you see my example please? My thanks!

Actually, you have scene activate triggers on 1 and 2 - so you jump from scene one to scene two and then scene three instantly.

On scene three, you have a timeline trigger that waits 1/2 second before jumping back to scene two - which of course instantly jumps to scene three and waits again briefly.

Get rid of the scene activate triggers on scenes one and two. If you want to automatically move between scenes - use timeline triggers but give yourself enough time to view the scene.

Hello macavi!
So, nothing is happening! Definitely, no scene skips, I did several tests but nothing! Stay still! Can you help me edit the attached project? It would help me a lot!

Detail: it does not work automatically, nor does it work with buttons.

I’ve removed all the actions and just added the necessary ones.

The example below use mouse click triggers to change scenes when the user clicks on the button.
manual-scene-change-using-mouse-clicks.saolapack (2.3 KB)

Mackavi,
THANKS, THANKS and THANKS!!! for your patience and dedicated attention! Gratefulness to you and everyone!